From Venus to Botero

Hiding beauty at all cost

On December 1859, in her mansion in Paris, the wife of Prince Charles Louis Napoleon Bonaparte, the beautiful Eugenia de Montijo, was engaged in a heated argument with her husband. She just saw the paint that artist Jean Auguste Dominique Ingres —an old decrepit and salacious man— as she contended, offered as a gift to the young prince. He resisted for a moment, since he really liked the painting, but at the end he gave in to the vehemence and indignation of his woman and ordered the return of the canvas. The painting was barred from the palace, but was forever made part of history. We’re talking about an oil painting over a circular canvas, a little more than a meter in diameter (108 cems.), depicting, as the artist imagined it, about 25 young women, completely in the nude, and in different erotic positions, some of them even offering each other tender and lesbian caresses. The scene took place, supposedly, inside the great harem baths of a Turkish palace in a period, difficult to determine.

Years before, Ingres had read a letter from Lady Mary Wortley Montagu, dated April 1717, written to a friend, Elizabeth Rich. In this letter, written after a journey around Muslim lands, which caused great sensation at the time, there’s a paragraph that obsessed Ingres for the rest of his life: “I think there were a total of about two hundred women; the first sofas were covered with pillows and extravagant carpets, where ladies were seating down; and in the second set of sofas, behind them, their slaves were seating. All of them in their natural condition, in other words and in plain English, portrayed exactly as they came into this world. Many of them were perfectly proportioned, like any goddess painted with the brushes of Tiziano. I loved their courtesy and beauty. Any man found in a place like this is sure to die.” Today, we can see a second version of this painting at the Louvre Museum, almost identical to the first, painted in 1863, when Ingres was already 83 years old. The painting established Ingres as one of the greatest advocates of romantic realism in the arts, he was very educated, which

is one of many reasons why he took this risk, for Picasso and other great painters, and besides, he gave the name to what we know today as “Turkish bath”. It would also be a jubilant call for all plastic surgeons and lyposuctionists of the planet, since Ingres’ taste for flesh, perfectly reflected in his painting, was similar to that of Rubens. We’ve started this chapter talking about this scrumptious anecdote in order to illustrate a fact that has gotten much attention from historians throughout the centuries, and that is the almost absolute absence of the representation of the human body, especially the female body, in the Islamic art. The solid beauties that Ingres painted in the “Turkish baths” were only embedded in his mind —luxurious— without a doubt, but not in solid historic or documentary factors.

The practice of “jihad”, the code that establishes the requirement of not showing parts of the female body in public (thus, the use of veils, tunics, cloth to cover their faces —nigab— full-body black cloak, and burkas, which only allows the woman to look through a piece of cloth), besides the absence of literary descriptions or even biographies, has made it impossible for the western civilization to know exactly what Islamic women look like under their garments, and I guess in a way for the men, too. When the Greek philosophy was already discovered and discussed for two centuries by educated men, when the Roman Empire dominated enormous extensions of land on the east and west sides of the Mediterranean, and the Buddha had already been part of mythology and human history for a long time, Islamism didn’t exist yet. Arabs, inhabitants of the Arabic Peninsula (currently Saudi Arabia and parts of Syria, Yemen, Kuwait, Iraq, and the Emirates) made up clans and tribes from the dessert, the Bedouins, who adored the stars and some stones, and in the coasts and to the more humid north, they had built some small towns, such as Palmira and Petra. The coastal kingdom of Saba, where Yemen now stands —that of the beautiful Hollywood-looking queen who was allegedly Salomon’s lover— had disappeared about a thousand years ago. And these Arabs were not yet Islamic. Everything started with Muhammad, the last of the prophets, who came after Musa (Moses) and Isa (Jesus), but the most important and the last in the chain, according to the Muslims. This man, who lived about 62 years (570-632 NE), never traveled outside the limits of the Arabic Peninsula, where he was born. He was a merchant until the age of 40, and from then, he became a preacher and sometimes a warrior, even though with unfit military fortune.

He left his followers a cluster of verses expressed verbally, since he was illiterate, so that they could put them together in the form of a book, the Coram, which would become the guide and source of the truth revealed to millions of people. Muhammad, a contradictory man in his actions —he first got married with a woman 20 years his senior and then with a 6 year-old— he had, without a doubt, great power of persuasion, proven by the fact, among others, that he was able to convince his followers that he traveled to Jerusalem in one night and in another to heaven to be interviewed by dead prophets, or when he justified, in the name of God, mass decapitations, such as that of the men in the tribe of Banu Qurayza. One of Islam’s most common practices is fasting. On different dates, throughout the year, but during the month of Ramadan, they must fast every day between sunrise and sunset. It could be and should be a form of purifying the body; therefore, of weight loss, but what usually happens is that they consume exaggerated amounts of food during the hours they are allowed to eat.

Banning the consumption of alcohol could also be beneficial for their health, if it wasn’t transgressed in so many different ways. It is thanks to the Arabs that sugar is introduced in Europe. They didn’t discover it, but they did spread the harvest of sugar cane, and its subsequent industrial processing, even in Spanish lands, which would later allow for its arrival in the Americas. It is known that they really enjoyed homemade pastries and sweets. In medicine, the Arabs also had their golden era. Between the 10th and 12th Centuries CE, when Europe was going through its darkest times, great scientific figures of Arab culture kept alive the flame of the Greek and Roman knowledge, incorporating many contributions of their own: Abdallah lbn Sina, Avicenna for us (980-1037), wrote about the importance of being frugal when eating to avoid, among other ailments, obesity. Averroes, Maimonides, and other wise men also wrote, in the form of aphorism, about this issue. The Renaissance culture in Europe owes a lot to the Arab world, unfortunately, nowadays, the cultural and scientific fizzle from that era is no longer observed. 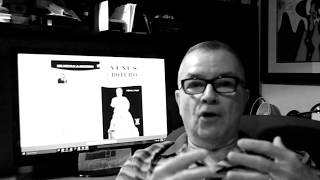 From Venus to Botero